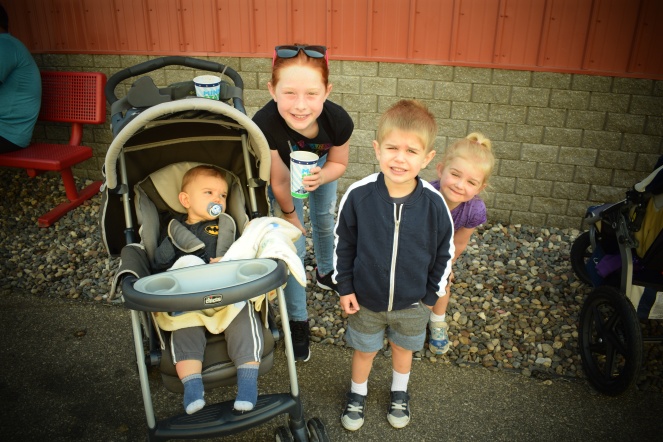 The last week and a half of August symbolizes many things to many people.  It symbolizes the end of care free summers, the start of school, and if you live in Minnesota and the surrounding areas, it means cheese curds, deep fried snickers bars, turkey legs, and anything you can think of eaten off a stick.  Yes, the Great Minnesota Get Together…..the Minnesota State Fair.  The smells, the sounds, the sights, they all bring out a sense of summer coming to a close.  I hate the State Fair.  I do not like crowds, and I do not like all the smelly people.  But, my kids were soooo excited to go, and being the good mom that I am, I decided to suck it up and bring all four of them to the Fair this year.

The kids had been hyped up about the State Fair for about a month.  Dammit.  It didn’t help that their daycare did a full State Fair week, and they described a magical land where kids got to eat donuts, and cotton candy, and pet all the baby animals they wanted.  Yes, that is kind of true, but it’s a nightmare for parents…especially a parent who does not like crowds, and once got sick at the State Fair.  I get anxiety thinking about it… the smells, the gross people, the whiny kids.  No thanks.    But, sometimes being a parent means doing things that you do not want to do.

My hubby, Mark, on the other hand is a homegrown Minnesota guy.  I mean seriously.  He is a 6’5, 225 lb dude who grew up playing Duck Duck Grey Duck.  That’s the “correct” way to play Duck Duck Goose according to him. I don’t buy it, but he’s super cute, so I just let him go with it.  Anyway, he LOVES the State Fair and was dead set on going.  Nothing was going to stop him, even when our 10 month old Callum started puking two days before.

Poor Cal woke up the Friday morning before Labor Day covered in puke.  That’s a mother’s worst nightmare.  I felt horrible for him, but I also felt horrible for me.  This meant it was inevitable that I would spend the next day or so covered in puke as well.  This also meant lots of laundry and lots of carpet and furniture cleaning.  You can’t really tell a baby to puke in a bucket, so you just hope you can put enough towels around them to catch it. But, nine times out of ten, they find the one place that is not covered in a towel to launch their vomit.

He was pretty miserable all day Friday and Saturday, but only threw up when he ate.  Ok, that still sucks, but at least he wasn’t throwing up randomly throughout the day.  We knew when to expect it.  We tried to keep him hydrated and  kept him comfortable throughout the day.  He had his ups and downs, but he was fine overall.  With Cal being our 4th child, I was at a point in my motherhood training to know that I do not need to run to the doctor at the first sign of puke, so I let him ride it out.

Sunday came along, and that meant State Fair Day!!  (ugh).  I gave Callum a bottle when he woke up and he immediately puked all over me.  I suddenly had a twinkle in my eye!  This meant that I could stay home with him and let Mark take the other 3 to the fair!  I put on my best concerned mom face and told Mark that Cal had puked.  Mark

said something about the fact that all he’d have to do is ride along in a stroller for a few hours, and like the good parents we are, we brought our baby who had been puking for three days to the State Fair!

When you go to the State Fair with 4 kids, 3 of them 4 yrs and under, you need to be strategic.  We left our house at about 7:30am.  It’s about a half hour drive to get there, and another 15 minute walk from our secret parking spot!  So, we arrived at the gates around 8:15.  Luckily, my brother was in town visiting, so we dragged him with us.  Our entourage included three adults, a 9 year old, a 4 year old, a 2 year old in a stroller, and a 10 month old pukey baby in a stroller. 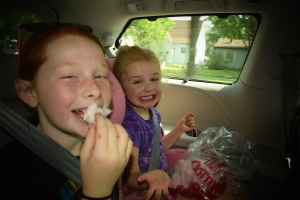 Once again, being the good parents we are after feeding the kids mini donuts, cheese curds, and hot dogs, we got the girls cotton candy on the way out to top it all off.  Hey, one day a year of shit eating is fine, and we created some fun memories!

After we got home, we tried to give Cal another bottle and he immediately puked it up again.  I was starting to get worried.  He had been throwing up for 3 days, which is longer than the 24 hour bug.  Something was going on with him and I couldn’t figure out what it was.  He only had a mild fever of about 100, his affect was pretty decent most of the time, and he was sleeping ok at night.  And then, Monday (which was Labor Day) came.  My poor baby woke up covered in puke again, and was very whiny and lethargic.  I called the emergency nurse line because he had been throwing up for about 4 days, and my motherly instinct (yes, I do have one) just felt that something else was going on.  The nurse told me that we should probably get him checked out within the next 24 hours.  We gave him 10 mls of Pedialite every few minutes to make sure he was hydrated, and then I started alternating with 10 mls of formula to give him some sort of nutrition.  He kept all of that down, but when we woke up from his nap, he was not himself.  He was whining in pain, still hadn’t eaten a full bottle and his fever was rising. We decided to take him to urgent care (the only thing open on Labor Day).  Once again, luckily my brother was there, and he watched the other three kid as we ran out the door.

The doctor at Urgent Care examined Callum and gave us scary news.  She said that there was nothing they could do for him there, and we need to immediately take him to Children’s Hospital to get imaging of his intestines.  She was worried he had a blockage or that his intestines were twisted.  I’ve heard horror stories of people losing their children to ailments such as blocked intestines, so I went into panic mode.  We called my brother to let him know what was going on, and raced to the hospital.  Cal was whining in the car as we drove the 30 minutes it took to get to the emergency room at the hospital.  This was the one time that I was grateful for Mark’s quick and aggressive

driving.  We couldn’t get there fast enough!

We got checked in, and my poor baby got changed into a hospital gown.  It’s hard to see your child in a hospital laying there in pain.  The doctor came in, examined poor Callum, and said the best words ever.  She said she wanted to talk about what is commonly going on right now, and start from there.  Apparently, there was a virus going around the community, so she checked Cal’s throat to see if there were signs.  There were, and that was good!  Callum had Hand, Foot, Mouth Disease.  Harlow actually had it twice when she was little, but had totally different symptoms.  That bastard of a virus can show up in multiple ways and make kids sick.  The doctor gave Cal some ibuprofrin and Zofran.  We were to wait twenty minutes, feed him a bottle, and see what happened.  If we kept his bottle down, we could leave, but if he puked again, we had to be admitted and had to hook him up to IVs to help with his dehydration.  Zofran is the medication often given to women who experience sever morning sickness in the early stages of pregnancy.

Cal was able to keep the bottle down with the Zofran’s help, and we were discharged.  For the next couple of days, the Zofran helped him keep most of his food down.  But then everything started coming out of the other end.  Seriously, motherhood is not all rainbows and unicorns. It is a mix of rainbows, puke, unicorns, and cleaning up shit.  But, I am so grateful to clean up that shit as long as my kids are safe and happy.  It’s kind of like life in general.  You have to go through a bunch of puke and shit to find your rainbows and unicorns.  I’ve definitely found mine.

One thought on “The Great Minnesota Get Together…and Puke”