Every mom has this vision in her head of getting that perfect family photo to use in Christmas cards, show off to friends, get printed on a too expensive canvas to hang in their fancy dining room, and/or to end up doing nothing with because, well…life.  I, too, had this vision in my head and scheduled a photo session for a nice Spring day in May 2017.  Once that session was scheduled “The Hell of Family Pictures” began.

Phase 1 of The Hell of Family Pictures: Panic Sets In

As soon as I scheduled the photo session, a huge wave of panic overcame me and I started turning into a crazy lunatic who felt like her life depended on getting a perfect photo of an imperfect family.  I scheduled the session about 6 weeks out, but from day one I started reminding the kids (and my husband) how important the photos were to me, and that I wanted them to be on their best behavior on picture day.  IT WAS 6 WEEKS AWAY.  They can’t remember to be on their best behavior when I mention it to them 5 minutes before walking into Target, let alone 6 weeks before our photo session.  I was crazy, but it was important (to me).

Phase 2 of The Hell of Family Pictures: Outfits

We’ve gotten family pictures taken a total of three times so far.  The first time was after we had Harlow.  Then, we found out we were pregnant and we ended up taking a new set of family photos after Jacek was born.  Then, we found out we were pregnant and we needed to take a new set of photos after Callum was born.  So, this wasn’t my first family picture rodeo.  I knew that I needed to start thinking of a color theme for our outfits that wasn’t too matchy-matchy but looked like there was some thought put into it.  I had this great idea in my head, and actually found outfits for the boys fairly quickly!  However, for some reason no store in the universe was selling purple dresses for kids at the time. I looked everywhere, and while I didn’t find purple dresses for the girls yet, I found the PERFECT dress for me!  I was so excited because it was exactly what I was looking for!  I ordered it, and felt great that all I needed to get now was outfits for the girls and  I’d be done.  I was way ahead of schedule!

The next day I got an email from the store that they actually did not have the dress in my size in stock and they cancelled my order.  FML.  This should’ve been a sign.

Fast forward to the DAY BEFORE the photo session.  I still did not have outfits for the girls or myself.  I decided to swallow my pride and go in to a store that I generally do not shop at because it was my last hope.  I actually found two cute dresses for the girls, but they were not purple and did not fit my original grand vision.  I needed something though, so I bought them.  I then realized the boys needed shoes, and I still did not have anything to wear.  I made a last ditch effort and ran to Target to get shoes for the boys, and then proceeded to by every blue shirt I found in the store for me.  I tried them all on at home, and Mark helped me pick the best option.  I laid all our outfits out on the bed, and realized that we were going to be the too matchy-matchy family, but I had run out of time.

Phase 3 of The Hell of Family Pictures: The Morning Of

I generally get in to full -blown psycho mom mode the morning of family pictures because I need everyone to listen, let me do their hair, agree to wear what I picked out for them, and not be tired/ready for a nap as soon as we get to the location.  I mean, that’s not too much to expect from a 9 year old, a 3 year old, a 2 year old, and a 7 month old, right?  GAH!  Oh yeah, and I have to get ready on top of all of that.

I think we started getting ready about 2.5 hours before the photo session, and we were still running out the door late and sweating.  And, just to make things even more interesting, we could only find one of Harlow’s shoes (because, why not?!).  We are lucky (or maybe unlucky) that we live about 3 blocks from a nice Super Target, so I dropped and rolled out of the car while Mark drove past the front door.  I “mom walked” to the shoe section, and found a pair of sandals that would match Harlow’s dress.  I bought two sizes to make sure they fit!  I walked out the front door, saw the mini-van coming, and jogged next to it as I thrust my body through the passenger side window, and we were on our way!  (ok, so maybe it didn’t quite happen like that, but that would be totally awesome if it did!).

Phase 4 of The Hell of Family Pictures: The Calm Before the Storm

On the 20 minute drive to the park we were going to use as our backdrop, I was feeling pretty good.  The girls were being kind of quiet, but Jacek was being a little happy ham!  I even said to Mark, “well, at least we know we’ll have one kid smiling in our pictures! (BIG MISTAKE.).   Callum got a good night sleep and was in a good mood, and I was feeling pretty good about everything.  DEEP BREATHE.

Phase 5 of The Hell of Family Pictures: The Storm

Ok, you guys…let me just say that I am so thankful for our photographer at Victoria Talbot Studios.  She did an amazing job of going with the flow as shit started to hit the fan very early on in the photo session.  As soon as we sat down on the blanket for a full family shot, Jacek lost it.  He refused to smile.  Remember how I said “at least we know we’ll have one kid smiling in our pictures?”  I totally jinxed it.  Jacek was a nightmare.  Exhibit A:

Doesn’t look too bad, but he refused to smile.  It got worse from there, so we decided to move on to some shots with the girls instead.  They rocked it!  And, Michaela has a future as a Director of Photography because she kept coming up with ideas about poses and cool shots.

And I can’t forget this stud who did amazing, and I think he totally has a future in modeling (am I biased?). 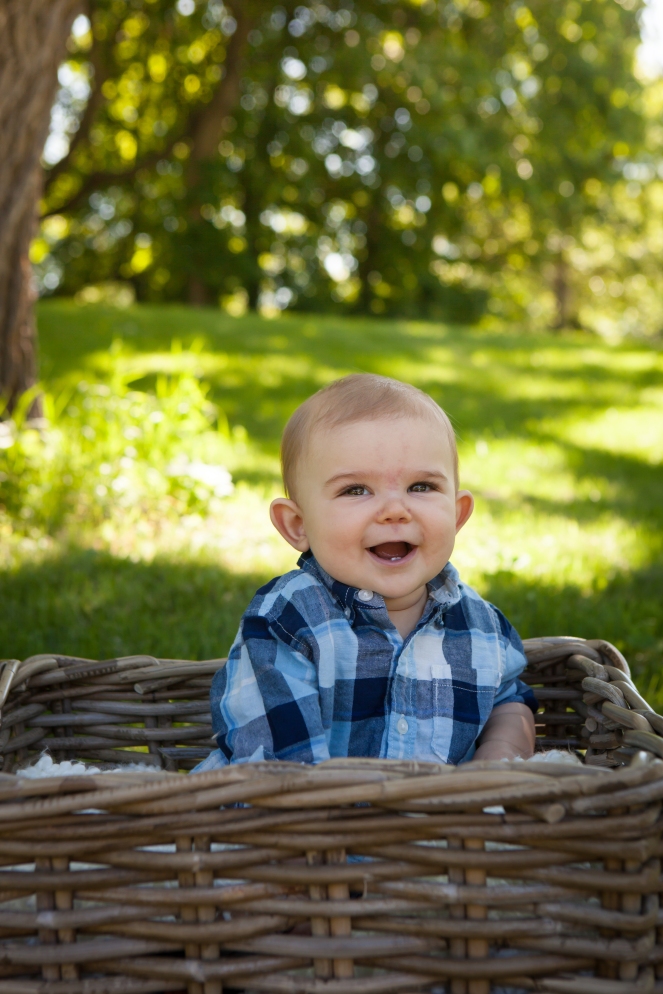 At this point, we thought we had given Jacek enough time to loosen up and get comfortable, so we tried some more with him.  This is how it went: At one point, Jacek actually took off running and ran into the woods.  We ignored him.  And then got worried, so Mark trekked through the wilderness to retrieve him.  While he was gone, we got beautiful pictures of the kids, and I really wanted to get some good pictures of Jacek.  As Mark brought him back from the woods, he had him on his shoulders and I noticed that he was smiling!  I asked Kaitlin to get some shots of him like that, and magic happened!

Then, I had an idea!  We had great individual shots of the other kids, but I really wanted at least one of Jacek.  What if Mark kept him on his shoulders, but kneeled, and Kaitlin took pictures of him that way?!?!?  This is what we got! 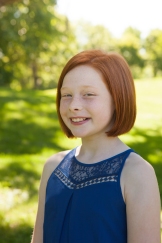 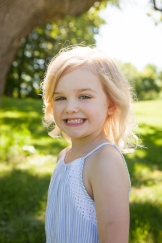 Kaitlin asked if we should keep shooting, but at this point Jacek was going downhill again, and Callum was joining him.  We didn’t think we’d get anything good from this point on, so we decided to call it a wrap.  We strapped all the kids back into the van, and hoped that we had at least a few good pictures to print and use.

Phase 6 of the Hell of Family Pictures: What Just Happened?

As we were driving home, panic set in again.  It was so chaotic trying to get everyone to cooperate that I realized I wasn’t sure if I was even in any of the photos!!  If I was in them, was I smiling?  Was I sucking in when I needed to?  Did I ever look at the camera, or was I looking at the kids trying to get them to smile the whole time? I was so focused on the kids that I have no idea what was going on with my face and body.  I contemplated calling Kaitlin to just double check that I was in the pictures!

Phase 7 of the Hell of Family Pictures: Happiness and Relief

About two weeks later, we received the final product….and the pictures are AMAZING!  After the Hell of Family pictures, we got some amazing photos that we will cherish for forever.  I even love the “outtakes” because they show that there is perfection in the imperfections.  At the end of the day, I have way more than ONE perfect shot to put on a Christmas card.  I have a snapshot in time of the crazy, happy, love-filled, imperfect life that we live, and I could not ask for anything more! 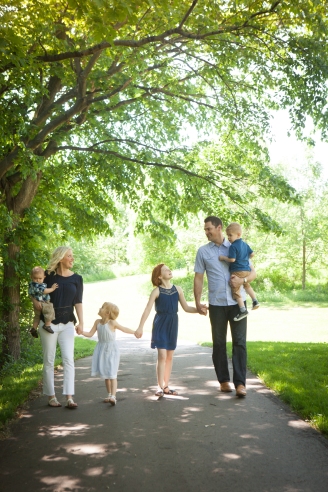 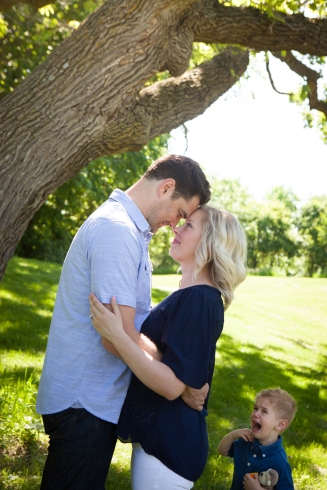 One thought on “The Hell of Family Pictures”